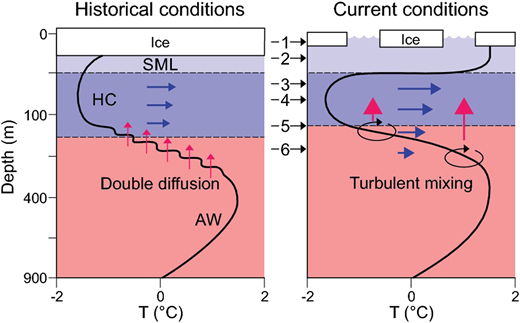 The Arctic Ocean in the upper 100 – 200 m is typically characterized by a cold and fresh surface mixed layer and a layer of rapidly increasing salinity with depth, as known as halocline, separating the surface mixed layer from the warm and salty Atlantic water at depth. Due to large vertical density gradient and static stability of the halocline water, the surface mixed layer is mostly isolated from the influence of warm and salty intermediate-depth water originating from the North Atlantic Ocean. A new study published in the Journal of Climate analyzed mooring date in the eastern Eurasian Basin (77 – 80oN and 125 – 142oE) during 2003-2018 to report a gradual weakening of the halocline and a shoaling of the warm Atlantic water. Consistently, further analysis of the mooring data showed that the upward oceanic heat flux across the mixed layer base in the winter season (65 ~ 150 m) substantially increased from an average of 3 – 4 Wm-2 in 2007–08 to >10 Wm-2 in 2016–18. The study suggests that the increasing speed of the wind-driven upper ocean current (due to decreasing sea-ice and increasing exposure of surface ocean to wind) and associated shear-driven mixing at depth are the main causes of the increasing upward oceanic heat flux. An important implication of this report is that Arctic sea-ice in the winter season is increasingly melting from below due to the increasing upward heat release of the warm Atlantic water, potentially contributing the winter-time Arctic amplification of the lower atmospheric warming.