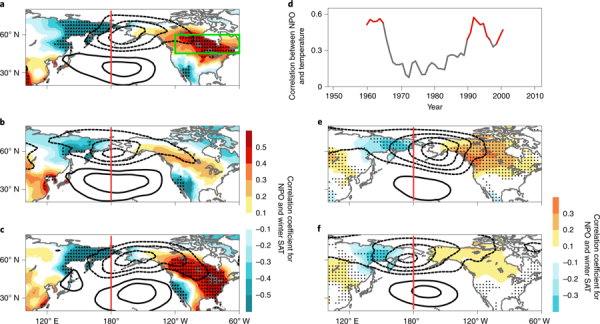 The North Pacific Oscillation (NPO) is a dipole oscillation of the sea level pressure (or the atmospheric mass) between the subpolar low and subtropical high over the North Pacific Ocean. A study published in Nature Climate Change showed that the center of the NPO shifted eastward during the recent decades (1995-2014), and thus increased the frequency of... END_OF_DOCUMENT_TOKEN_TO_BE_REPLACED

During the mid-Pleistocene between 1,250 and 700 kyr ago (ka), Earth’s climate oscillated between warmer interglacial periods and cooler glacial periods with reduced and expanded polar ice sheets, respectively. Paleo records indicate that the Atlantic meridional overturning circulation (AMOC)  was relatively weaker during glacial periods likely due to reduced evaporation and increased freshwater input from glaciers to the... END_OF_DOCUMENT_TOKEN_TO_BE_REPLACED